"The Outsider" is a short story by American horror writer H. P. Lovecraft. Written in 1921, it was first published in Weird Tales, April 1926. In this work, a mysterious man who has been living alone in a castle for as long as he can remember decides to break free in search of human contact and light. "The Outsider" is one of Lovecraft's most commonly reprinted works and is also one of the most popular stories ever to be published in Weird Tales.
Horror historian Les Daniels described "The Outsider" as "arguably the author's finest work". Though some may contend that Lovecraft's "The Outsider" is purely a horror story, there are predominantly Gothic themes that play significant roles in this short story including loneliness, the abhuman, and the afterlife that take it to a more psychological level. 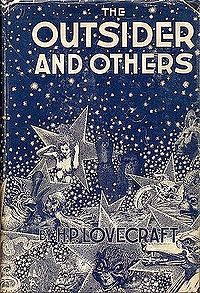 The Hound was written  in September 1922 and published in the February 1924 issue of Weird Tales. It contains the first mention of Lovecraft's fictional text the Necronomicon.

Email ThisBlogThis!Share to TwitterShare to FacebookShare to Pinterest
Labels: horror